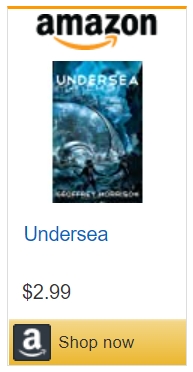 In a world flooded and irradiated by a nearly forgotten cataclysm generations passed, all that remains of civilization clings to life in two war-torn, city-sized submarines. For fifty years, the only peace between them has come from separation.

Now, young councilwoman Ralla Gattley has uncovered mysteries that will bring these two factions face-to-face, setting in motion events that will forever change their undersea world. Along the way she meets Thom Vargas, a bored fisherman and aspiring drunk who merely wants to climb one rung on the social ladder. Little does he know that single step may well put the fate of the world in his hands.

Geoffrey Morrison’s debut novel Undersea was a best seller on Amazon in the US and UK, and at Barnes & Noble Booksellers. It’s now available on Kindle and in paperback. 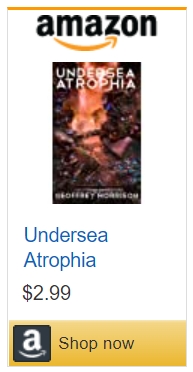 A great silence has settled upon a drowned world. In the final battle of their final war, the massive citysubs Universalis and Population reduced each other to ruins. One lays wrecked on the seafloor. The other, beached and lifeless, litters the island of pristine polar ice it tried to destroy.

Pockets of survivors huddle together. On the frigid surface, Ralla Gattley and Thom Vargas cling to life and each other. Below, the soldier Geran Lo fights relentlessly to free trapped and drowning civilians.

As they struggle against a world determined to kill them, a new and even more dangerous menace approaches.

Feel free to bug Geoff via email or Twitter about finishing the long awaited conclusion to the Undersea trilogy.